The Iredell County Sheriff’s Office Detention Facility Special Operations Section, consist of the Jail Extraction Team, K-9 Team, and Transport Team. These special operations teams are comprised of deputies and detention officers that have received specialized training in the areas of emergency response to inmate riot and inmate barricade situations within the facility, the use of canines within a detention facility and the transportation of mental commitment patients from local area hospitals to local mental health facilities throughout the state.

Chaplin Program
Mission Statement
The Spirit of the Lord God is upon me; because the Lord hath anointed me to preach good tidings unto the meek; He hath sent me to bind up the brokenhearted, to proclaim liberty to the captives, and the opening of the prison to them that are bound. Isaiah 61:1.

The Iredell County Sheriff's Office Chaplain is responsible for overseeing the operation of both areas, for approval of volunteers, and for communication between the Sheriff of Iredell County and the work of the ministry.

The Detention Facility Chaplain is responsible for scheduling services, times and volunteers, who have been approved as volunteer associate chaplains.

Food Service
The Iredell County Sheriff’s Office Detention Facility Food Service is provided through a contracted major food service provider, who employees the food service manager assigned to the detention facility. The food service manager employees other staff members are responsible for providing a full-time food service that provides 3 meals a day, 7 days a week from our on-site kitchen within the detention facility to the inmate population.
Honor Guard
The Iredell County Sheriff’s Office Detention Facility Honor Guard consist of deputies and detention officers that dedicate themselves to provide a service that represents the Iredell County Sheriff’s Office at special events or services that requires the presentation of the United States Flag and North Carolina Flag. The special events range from D.A.R.E. graduations for area schools, presentation of the flags at formal gatherings such as the annual North Carolina Jail Administrator’s Association, or any formal request from a member of the Sheriff’s Office or Sheriff’s designee.

The Honor Guard also provides a service at funerals involving members of the Sheriff’s Office, immediate family member of officers or civilian staff or honored representatives or dignitaries in Iredell County. 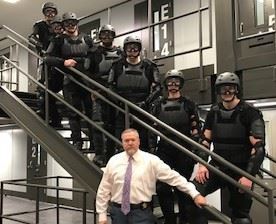 The Jail Extraction Team is a highly trained group of Detention Officers, specifically developed and equipped to deal with the tactical operations inside the Jail. Detention Officers on J.E.T.  are tasked with the responsibility of controlling and containing Hostile emergencies within the jail.

J.E.T. responds to incidents in all locations within the Iredell County Detention Facilities. Their duties include incident's involving violent or uncooperative inmates who refuse to comply with the direction from the floor officers or comply with jail rules within the facility. The purpose of the team is to handle such incidents using the minimum amount of force necessary to resolve the situation while maintaining the order and control required within the Detention Facility.

Iredell County Sheriff's Office, maintains 12 (trained and certified) J.E.T. members. These team members will perform the duties of the team as required by shift supervisors within the scope of the teams training. Each team member is required to maintain their training as scheduled by the team coordinators and trainers.

J.E.T. is specifically equipped with protective equipment, entry gear and tactics, to deal with the highest level of resistance that may be encountered within the facility. The protective equipment is designed to protect the officers in hostile confrontations. Head, face, chest, back, shoulder, upper and lower arm, elbow, knee, shin, groin and foot protection are worn by all officers on the entry team, along with the use of high impact protective shield, the Team is geared up to make entry, restrain and control combative inmates.

The team is trained to perform tactical containment and control of hostile situations in many different environments. Vehicles, confined spaces, large rooms, full light, no light, multiple inmates and or group disturbances. The teams train and prepare for any and all situations that may arise inside the facility.